This is the official fan site for the upcoming fanime movie, Tokyo Dark Mew, where YOU are in charge!

Outline for a Short Film Idea

Outline for a Short Film Idea

Characters:
Henry Vyxenox - Completely intoxicated, mildy hypnotized, by his new bride, Nat. He would do pretty much anything to ensure her saftey and well being.
Natalie Mason - Believes herself to be a vampire, but she's really a victim of an awful cult manipulated by halucitant drugs and cannibalism.

Setting:
London, England. Suburbs
Mid December
Snow is on the ground and in the trees. It's always cloudy outside, and everyone seems pretty serene.

Mega Plot Points:
Henry has just been forced into an arranged marriage against his will. His bride believes herself to be a creature of darkness -- a vampire -- and keeps this a secret from him, shying away from the sunlight and refusing to eat anything. In truth though, she is only victim to a crazy cult manipulated by halucitant drugs and cannibalism. Their leader, Kenric, is madly in love with the girl, and she him (in a way). One evening, Nat and Henry meet, beginning to talk, beginning to bond. He soon falls heels over head, himself, but Nat is so compelled with the theory that she's a vampire and isn't worth his time that she almost never repays the affection. She tries to cut herself and fails.
One night, when Nat goes out to "feed," she kills a woman in her sleep. When the young son of the woman comes into the room, he bursts into tears and cries out for his mommy. Nat takes the boy home with her, convincing Henry to let her keep him. This ends up being the only reason she doesn't commit suicide.
When Kenric, however, tells her that in order to stay with her beloved husband she must make their new son one of them, she chooses death. Kenric slits her wrists for her and leaves her to bleed on the floor.
Henry is seen at a ceremony, mourning over the loss of his wife. The plaque reads:
"Natalie Vyxenox
Beloved Wife and Caring Mother"
The autopsy reads:
"Cause of death: Self inflicted wounds to the femeral artery, most likely caused by images suggestive to halucinative drugs." Kenric is a schizophrenic vision.
He lies in bed with his son that night after feeding him a cyanide pill, and the two go peacefully. 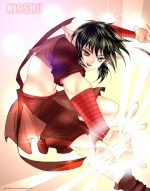 You really love vampires and darkness, heh heh. You raised by a horror film writer?

Larken: Actually, no. I'm the only person in my family of four (plus the super rich, conservative relatives) that ever got into horror flicks.

interesting.
but why that?
why drugs and vampires?
i think, it's a good idea.
but what about having a cliffhanger,
like, i don't know, at the end we found out that henry was a vampire?
or proably something deeper, add comfusion to it, like inhumen like visons from the drugs.
i don't know, but higurashi when they cry would be the marsters of horror, especilly episode 20.
unless you hate blood, death, and stuff like that, DO NOT START WITH EPISODE 20. instead start with episode 1.

first 40 seconds, becareful.
any way qurit a good plot you got there.
9/10

Lark: Except the vampire thing isn't real, it's her narcotic illusion.

but would you improve it?

Larken: Eh heh... I respect your critisism, but considering that I'm the one directing it, I think that I can pretty much say what goes and what doesn't. Henry is not a vampire.

sorry for disrepecting you, i did not mean to force my ideas on you, i just wanted to see how you would react.
why not a spinoff?
possible

Seth: Jesus Christ you're annoying. Don't you get it? The vampire thing is a hallucination brought on by hallucitant drugs. Get it? They don't exist. Larken's point in this is to create a tragic, one time love story between a man and his narcotic induced bride.

Would you stop bugging her now?

when i said a spinoff i did not mean a spinoff of the idea of the movie.
i ment a spinoff of....
na you would not be interested.

P.S. yes i know the vampire idea was not real and was created by the drug. i didn't want you to be annoyed about my past comments. sorry....